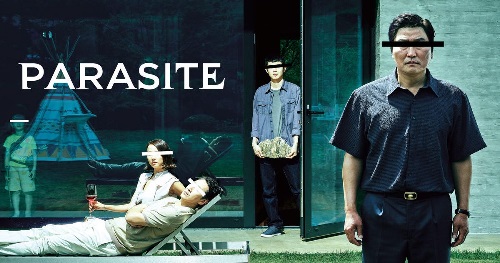 Have you read Franz Kafka’s The Metamorphosis? Let’s pretend you haven’t read it, then I shall give you a quick summary because if you came to me and ask me what Parasite is all about — I would tell you it’s the opposite of The Metamorphosis. You see, there is one thing they both have in common: It’s about the “filthy insects” of the society that no one aspires to be. Hey, I’m just being real. Unlike The Metamorphosis where the protagonist became a burden to the family, Parasite logically provides a rationale to why leeching is justified. If you think about it, the working class is like the earthworms we find in the garden. They are buried in the underground and hidden from society’s sight, but play a vital role in sustaining the glamourous lifestyle for the wealthy.

Now by no means, the film tries to justify bad behavior as acceptable in the society. Instead, it successfully illustrates the poor’s real struggle by giving them a voice, a different perspective that most often societies are too ashamed to acknowledge. It does bold things by tearing down and distinguishing the rich from the poor. From the wealthy perspective, money can buy many things. Money can ease the mundane worries that life throws at us. In contrast, from the poor perspective, money is power and money can also make one become delusional into believing that the world is a safe haven. For instance, the character Yeon Kyo, the naïve wife, does not deserved to be conned, however, her niceness stems from the fact she never had to deal with the daily struggles that normal people do — such as something as simple as cooking. Unfortunately, this is the beginning of a tragedy and the downfall of the Park family.

For my final thought, the film is a bit of a tragedy and at the same time, a bittersweet victory for the working class. The film does not condemn the rich for their naivety nor depict them as evil villains who suppress the poor from rising above in the society. The rich people in this film are just simply nice folks who provide jobs for the poor, but have become too delusional to relate to the struggles of the lower class. In the end, it’s the working class that rise to the top because they actually do the real work. Seriously, no pun intended. You can’t argue against this notion, which makes this film a powerful statement to the society. I can see why this film was voted for the best film of 2019 by critics.

Welcome to my world of amusement. Fishing for metaphors in books, films, video games, and TV shows is my passion. Enjoy a one of a kind of review! From my heart, I write.

I am here too