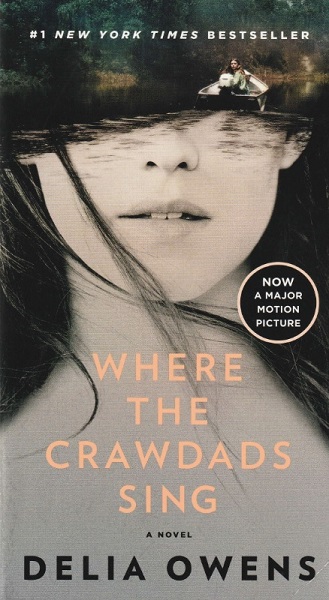 I appreciate flowers. I appreciate flowery words used to make Nature beautiful and comforting–that includes the marsh. This book reminds me of a fairy tale more than a story based on true life events because it’s all dreamily poetic. So, if you are looking for a story that will make you feel good and you want to be in tune with nature—this is the book. It’s all powerfully feminine just like Nature. Sometimes that’s all you need. Let her embrace you with her wild beauty. She will heal your ailing mind.

In this book, we follow the story of a girl named Kya, the protagonist, who grew up in the marsh. First, her mother left. Then one by one, her siblings left her too. Eventually, her abusive father left her as well. By age 10, the girl is left to survive on her own in the marsh, digging and selling mussels. Kya reminded me of a southern-style version of Lara Croft (a video game character). Instead of raiding tombs, Kya studies the marsh with sensitivity, embracing all the life it has to offer. She is a naturalist, an artist, a poet, and a scientist without proper schooling. Because of her mysterious ways, she is known as the Marsh Girl and is shunned by the locals. And yet, her wildness and beauty got her involved with two men from the local town called Barkley Cove, a made-up belief place by the coast of North Carolina. It’s a romance, murder mystery story with a flare of drama mixed with science. I think it’s a great mix of genres and a refreshing one.

I read some negative reviews on Goodreads, arguing that the protagonist is unrealistic and there are some inaccurate presentations of North Carolina’s dialects. I wouldn’t know since I am not from the region. However, it didn’t bother me because I understood what the author, Delia Owen was trying illustrate with her characters and the story the entire time: As the author stated, Kya is in all of us and one in a million (p.438, mass ed.). The author used science to explain the plot and the reasoning behind her characters’ motivations such as mating, social acceptance, loneliness, and isolation. For instance, if you have never lived alone for years and did not communicate with anyone daily (texting doesn’t count), the world can feel lonesome. When you have that much alone time, you start to ease the loneliness through your surroundings by acknowledging the liveliness of Nature. That’s how Kya survived all those years by herself. The marsh became her mother:

“Sometimes she heard night sounds she didn’t know or jumped from lightning too close, but whenever she stumbled, it was the land that caught her.”

-Page 40, Where the Crawdads Sing

As a character, Kya is innocently pure like Nature. I love how the author used her character to link with the civilized world. As a reader, I see it through the interaction between the locals and kya. From the outsider’s perspective, she is nothing more than bare-footed swamp trash. She couldn’t even read until the age of 14 or 15. And yet, the author paints her in the most beautiful light by mixing poetry into the story to evoke longing and empathic feelings. In this book, the marsh is beautiful and pure unlike the socially constructed society.  Religion, culture, customs, and social economics can make a society appears more barbaric than the marsh. Unlike humans, Nature is not prejudiced. She doesn’t ostracize people based on class, intelligence, genetics, etc. Instead, she provides shelter and abundance. All you ever need is within grasp, and the best part is that she gives it freely without expecting anything in return except for your embrace just like a good mother.

I enjoyed the book and its imagery of the marsh, but didn’t care much about the romance part. It was however, suspenseful enough to keep me turning the pages. There were a few parts that made me laugh hard.  I highly doubt I would watch the film. There’s something about written words that often get lost when it’s turned into a motion picture.

Join 205 other followers
Follow Fishing for Metaphors on WordPress.com