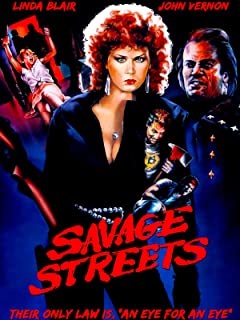 I’ve been thinking a lot about films and I’m beginning to enjoy the medium. It’s like poetry. It’s full of imagery and it gets to the point, especially for someone like me who is on the go and dislikes details. I guess I’m a bit savage myself–me think in a few words and like simplicity.

According to Miss Young, the school teacher in this film, poetry contains the following:

I could see it. There are a few catchy phrases that were cheesy but entertaining. The right songs are played in each scene, echoing the edginess theme. Lastly, the film has a good message. We could all take some notes from Brenda, the fiery protagonist played by Linda Blair who also starred in that terrifying film called The Exorcist. She is bold, and daring but just. And she is only a teenager–a teenager who dares to lit a cigarette in the classroom and tells her sentimental poetry teacher to back off. As she said, teachers only know their students for 1-2 hours. They don’t know them on a personal level and what they are capable of. Grr…feisty.

[Okay! Forgive me for my poetry rant. Let’s talk about the film.]

Savage Streets is at its savageness. It’s a comedy/drama that’s not to be taken seriously. Unless you are a teenager reading this review, you may find the film offensive. Why? Because teenagers don’t know anything in life other than peer pressure and seeking one’s identity and purpose in life. Unless you had a rough life like Brenda where you are forced to grow up fast, then that’s a different story. Brenda has to be tough because she got a deaf-mute sister to care for. It’s no surprise she takes the lead among her female friends. She is like the hunting bow of the streets with her pack, walking in the night fiercely and patrolling the streets from injustice. Like Scorpion from Female Prisoner 701 Scorpion, she is on a mission to put bad boys in their place. Brenda doesn’t wait for the law to set things straight and offer her justice. Instead, she gives that neanderthal, punk villain Jake what he deserves. She hunts and strikes that barbaric savage down with her sharp arrow. I could hear her say through her eyes: “I got you, bad boy!” Like a true heroine, she defends the weak from the domineering apes that prowl the streets.

I can’t tell you exactly what happened in the film because that would ruin the fun. Watch this film with friends, your significant other, or by yourself and I am pretty sure you would get angry but then have a great laugh. Well depending on your sense of humor. Mine is pretty morbid. Overall, fun film to watch–a few outrageous scenes and nudity that don’t make any sense other than the fact it’s there for eye candy. On second thought, watching with an easily jealous girlfriend might not be a good idea. There’s nothing more annoying than being accused of stealing someone’s boyfriend like in Brenda’s case. It’s not Brenda’s fault that men foolishly gravitate towards her hotness. I guess some men just want to get burned.

Join 249 other followers
Follow Fishing for Metaphors on WordPress.com